In the village of Saint-Émilion sits a secluded walled garden. Hidden inside is an exclusive vacation rental property.

“As people become more aware of their travel privilege, brands are helping to alleviate feelings of guilt by providing purpose-driven travel experiences that put local residents first and ensure tourism spending remains in the country.” The Future Lab, Future Forecast 2019.

When owners Stephen and Lisa first invited us to be part of their project, there was an interesting tension between connection and disconnection in the luxury travel market. Instead of ornate precursors of wealth, the luxury traveller pursued memorable and authentic experiences that would nurture meaningful relationships.

By contrast, in an era of digital hyper-connectivity and the ‘stress is success’ ethos, travellers were also looking for an opportunity to disconnect from their everyday lives and retreat into a new, tranquil environment.

We based the property’s core message on the idea of being 'in-reach' yet 'out-of-reach. Guests are ‘in-reach’ of the historical sites, local community, restaurants, and some of the best vineyards in the world, yet ‘out-of- reach’ of the throng of tourists, separated by a beautiful walled garden with a view of historic battlements from the patio and swimming pool. Whilst most other properties in the area can only offer one or the other, their guests would be able to enjoy the best the region has to offer whilst being able to retreat into absolute privacy, peace and quiet.

We used the positioning of total immersion with the concept of ‘in-reach, out-of-reach’ to inform all aspects of our creative direction. We began this process by finding a name for the property, looking for something that would link the property's walled garden and proximity to the village with the area’s history and wine making.

Saint-Émilion’s history goes back to Roman times. The town is a UNESCO World Heritage Site, with Romanesque churches and ruins stretching all along steep and narrow streets. The Romans planted vineyards in what was to become Saint-Émilion as early as the 2nd century. In the 4th century, the Latin poet Ausonius lauded the fruit of the bountiful vine. Saint-Émilion, previously called Ascumbas, was renamed after the monk Émilion settled in a hermitage carved into the rock in the 8th century. The monks who followed him started up the commercial wine production in the area.

In Latin the noun ‘pomœria’ describes a stretch of land just within the boundary of a Roman town or city. A sacred plot, outside of the bustle of the centre but protected within the parameters of the region. Feeling as antiquated as the region’s history, we felt that this name embodied the message we wanted to communicate and extend throughout the tone of voice and copywriting.

Having established the name we then looked for the right typeface to bring the name to life. Silk Serif stood out as a font that alluded to Roman letters carved in stone whilst conveying a contemporary elegance. This became the primary font with the logo being modified with chisled brakes in the letters referencing the dilapidated city wall circling Saint-Émilion. We also used a ligature linking the O and E to emphasis the Latin origins of the name.

For the colour pallette we drew on the environment of the region, the green of the surrounding vineyards, the Burgundy of the wine, and the limestone of Saint-Émilion’s stone architecture.

Sitting on soft limestone colour washes, we created illustations for the flowers used to provide the latin names of each room, along with aspects of the property, food and wine, and the views beyond the wall.

The photography direction drew on the ‘in-reach, out-of-reach’ concept, juxtaposing macro images of flowers, nature and household objects with the interior design, architecture and landscape of the region.

All of this came together in print materials, digital assets and website.

When you’ve selected a new agency after an exhaustive search and worked with them successfully to relaunch a luxury brand, it’s unsurprising that you’d turn to them again when creating a new brand from scratch.

Our latest venture is a luxury private-rental villa which we’ve converted from a 19th century property nestled along the medieval walls and most prestigious vineyards of Saint-Émilion, a UNESCO World Heritage site.

Delight accompanied us on the property’s journey from ‘ruin’ to ‘resort’ and explored the environs – first as friends, then as advisors. Daniel Shaw and Will Shorrocks quickly grasped our vision when it was still months away from becoming a reality.

The first task was the most challenging: creating a brand name that was both a nod to the sense of place and history of Saint-Émilion and not so ‘French’ that the name could come across as arrogant and unobtainable. That is a tall order. Several rounds of lengthy virtual brainstorming sessions (via Skype) allowed our brand name to emerge. They brought both ideas and research notes to the table that forced us to think outside the box, and made these workshops both productive and fun.

Once the brand name – Pomœria – was selected, our broader brand strategy fell into place quite fluidly, from messaging to colour scheme and imagery. The process of website and content development was extremely fluid and delivered on-time and on budget. We partnered again with Delight’s preferred photographer Richard Moran, so the team was back together to plan the shoot. Because Richard understands Delight’s approach to branding as easily as he does our own vision, he acts as extension of their brains as the images come to life.

Delight are experts at creating an artisanal touch and ‘handmade’ feel to our brand, both through original illustrations and imagery. They are brilliant at incorporating differentiating ideas and textures to our brand, which we believe comes from their work in the fashion industry.

We couldn’t be more pleased with the final result and have received nothing but rave reviews on the elegant, understated and beautiful representation of our brand, from both our B2B and B2C clients.

We will be pleased to further discuss our work with Delight with any prospective clients. 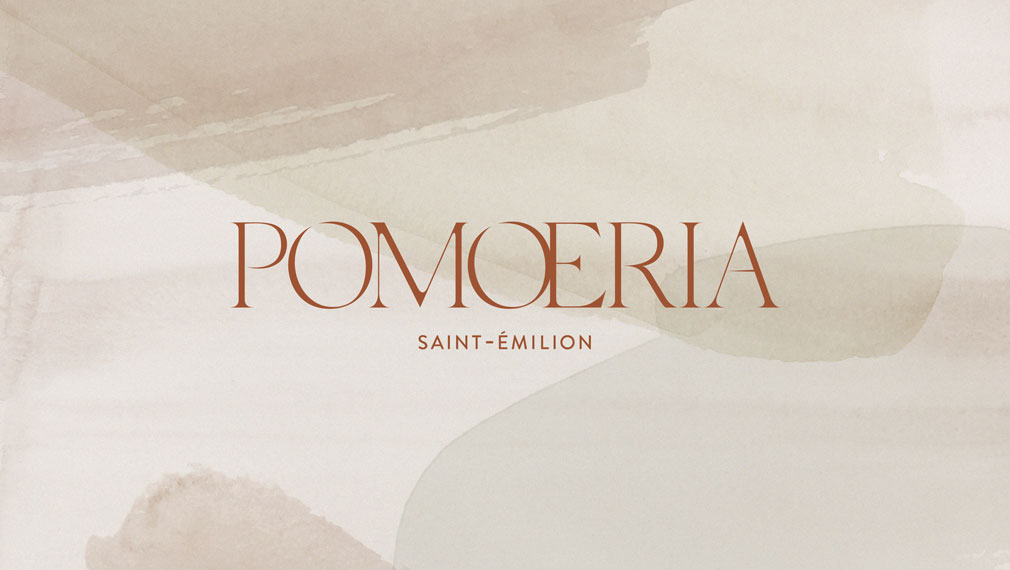 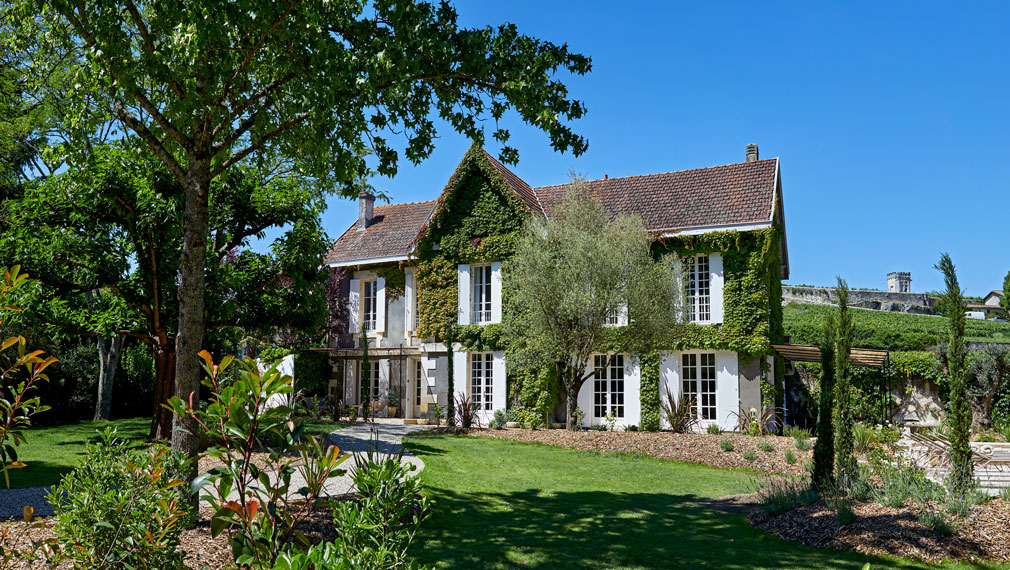 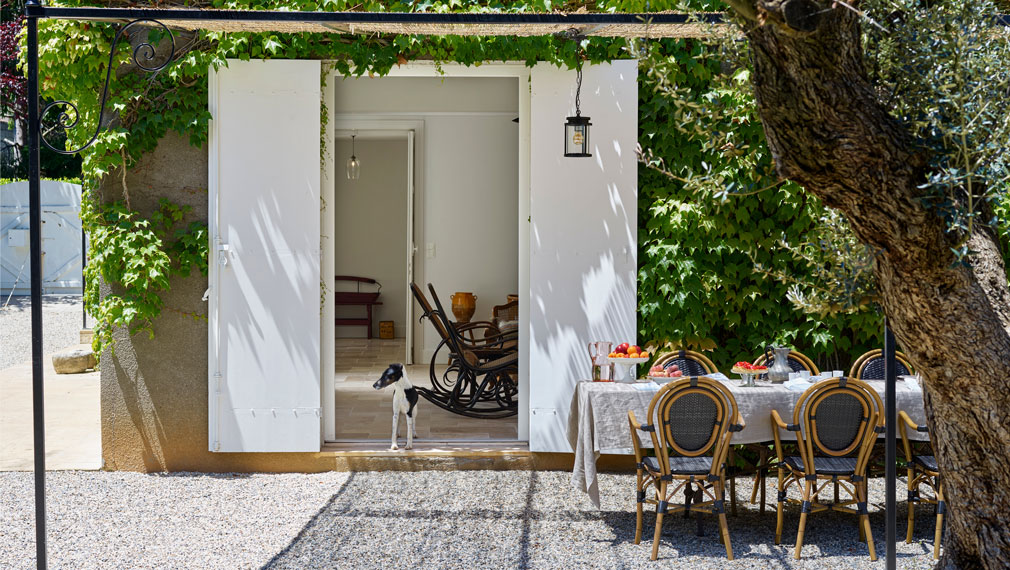 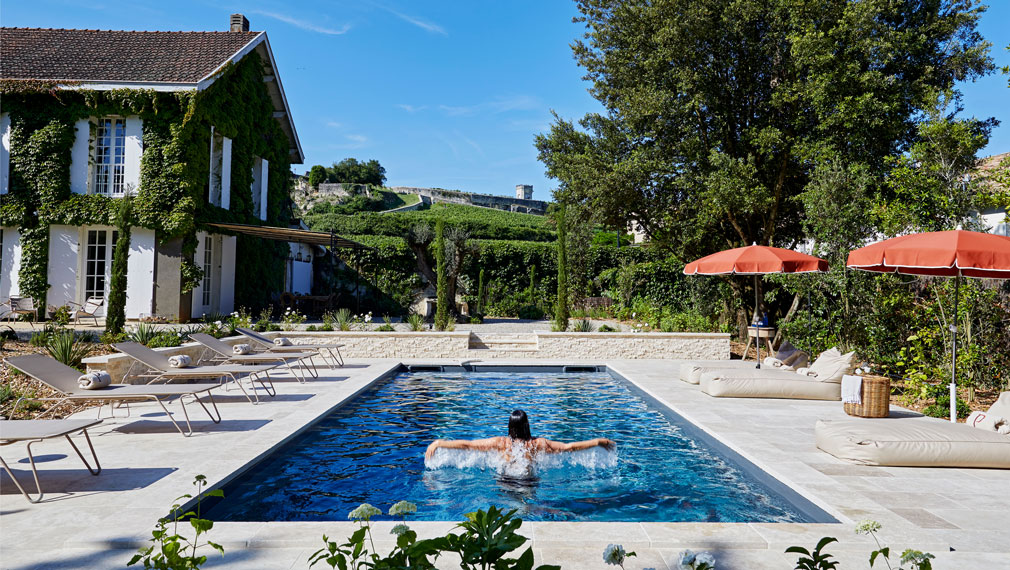 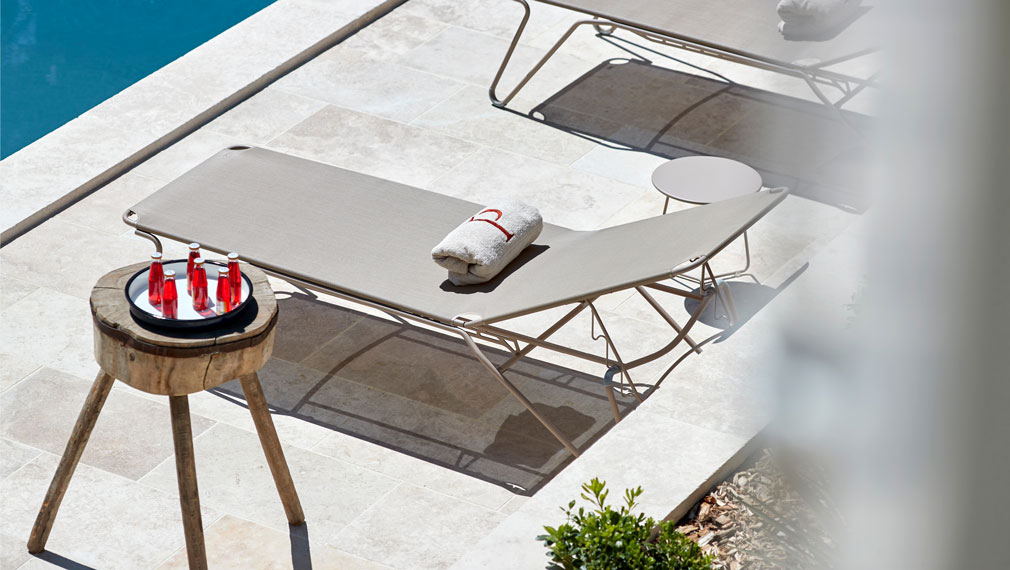 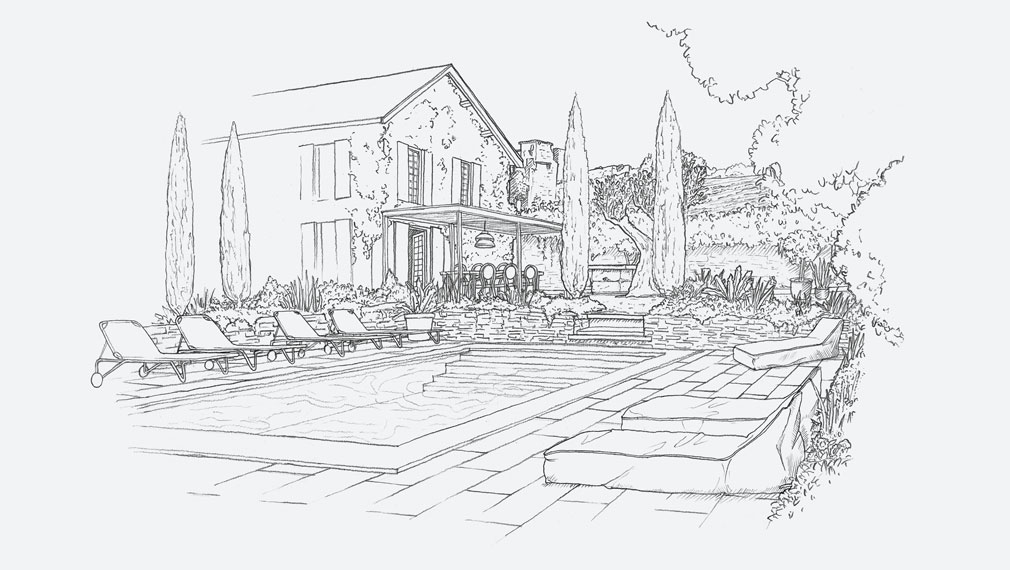 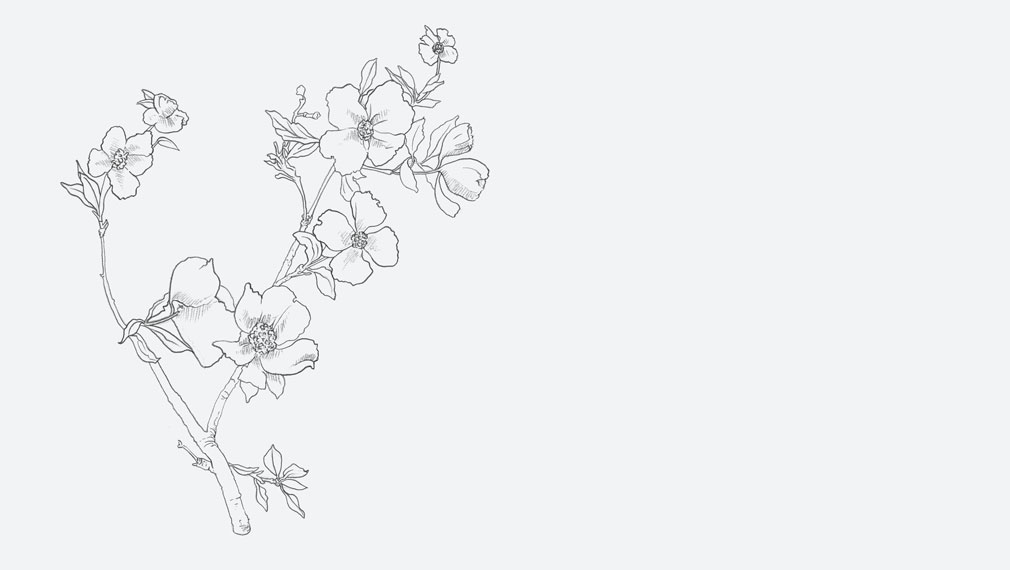 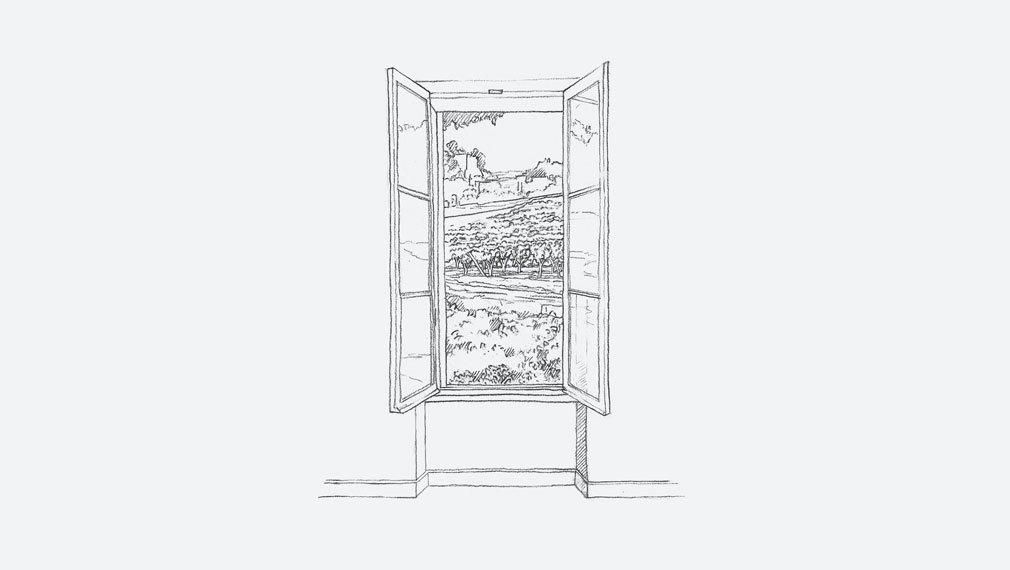 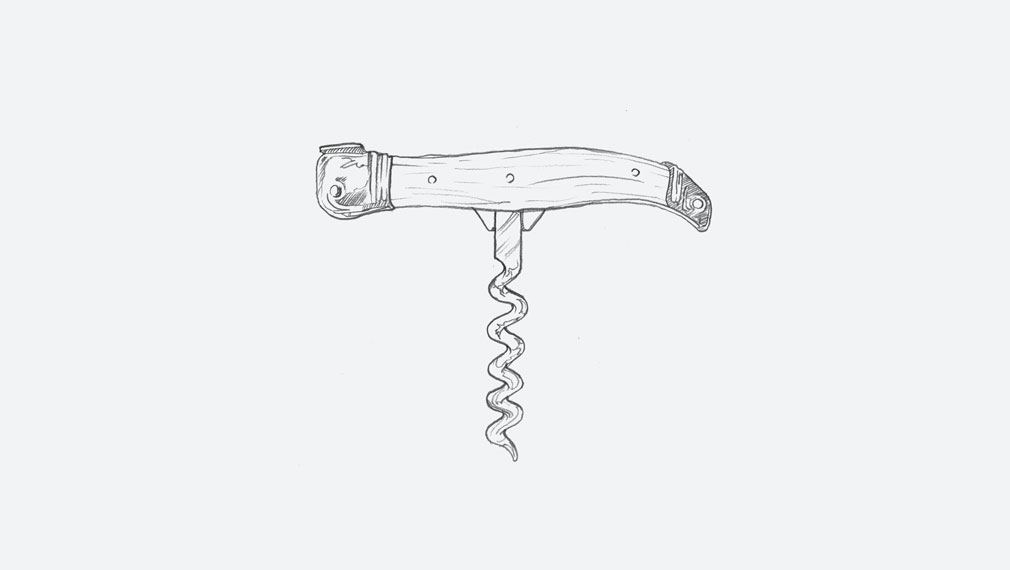 Sitting on soft limestone colour washes, we created illustations for the flowers used to provide the latin names of each room, along with aspects of the property, food and wine, and the views beyond the wall. 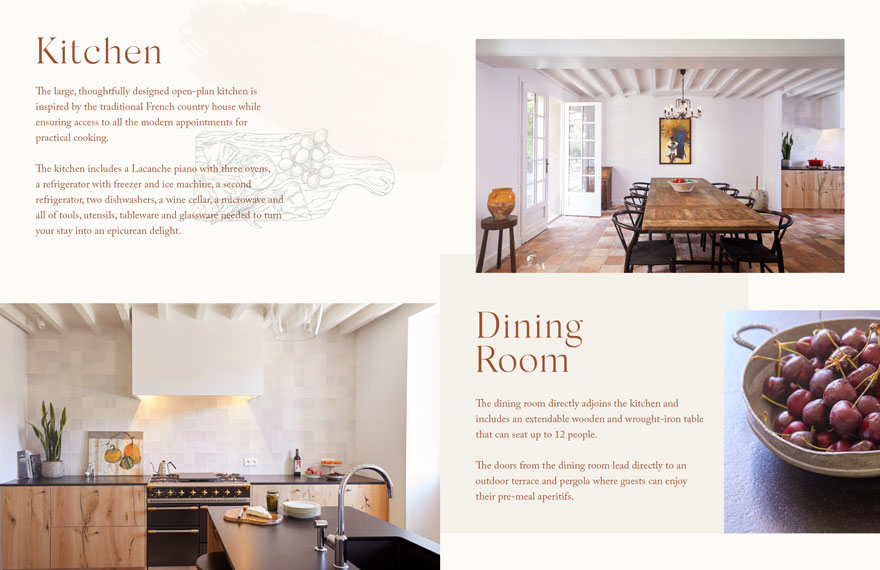 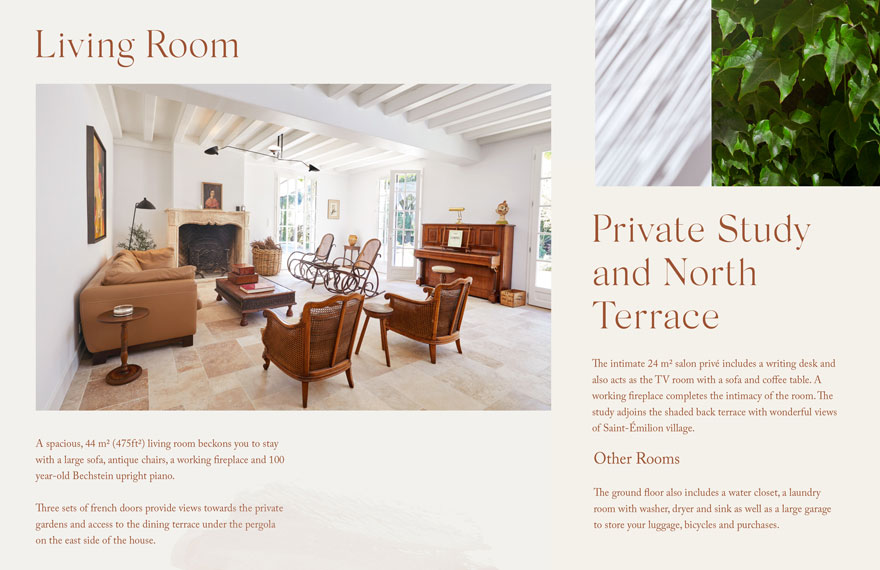 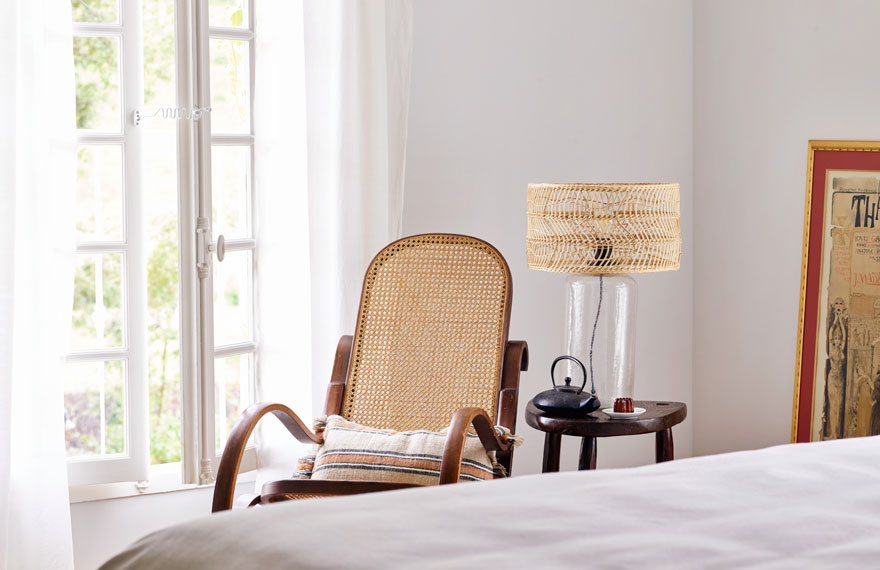 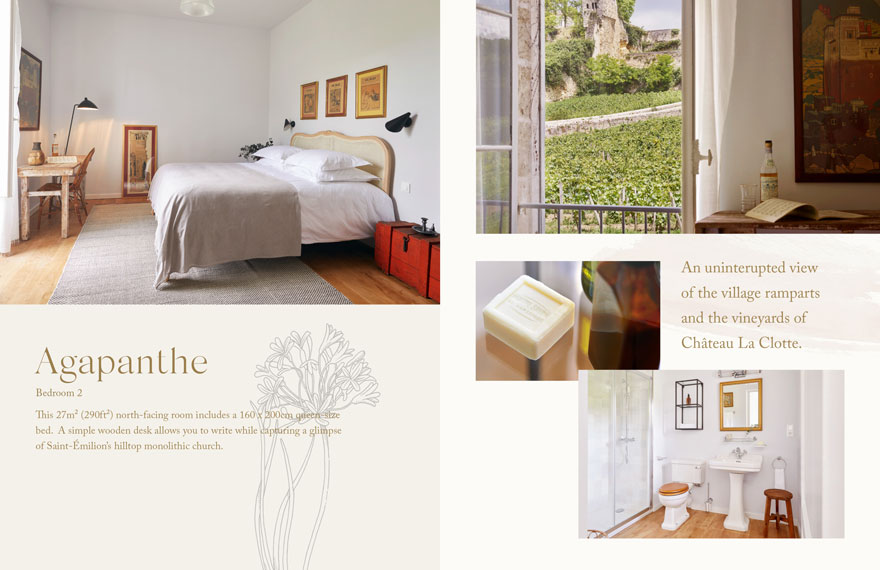 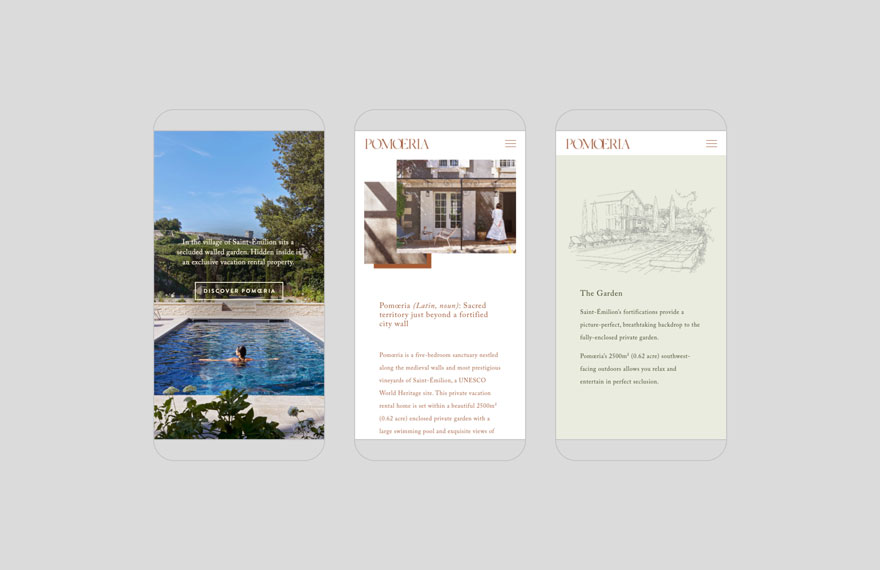